How Sedimentation Water Treatment Works and How to Make it Efficient

How Sedimentation Water Treatment Works and How to Make it Efficient

Sedimentation is the separation of suspended solids from a liquid by gravity. As solids and particles fall out of liquid suspension and settle, they become sediment. This process, often referenced as settling, is regularly used in water and wastewater treatment.

Suspended solids in a liquid can range from fine sand (>1,000 nm) to colloids (1-1,000 nm). A solid like fine sand or silt can take seconds to minutes to settle out of liquid suspension. However, fine silts and colloids can take weeks or even years to fall out of suspension naturally.

When to Employ Sedimentation

Please note that sedimentation is not and cannot be used for all water treatment applications. It’s essential to understand the characteristics of your wastewater to determine if it’s an effective treatment process. Plus, you need to define the goal of your water treatment.

Solids with a density lower than the fluid they’re in will be buoyant and require different removal processes like dissolved air flotation.

Further, sedimentation may be one of several water treatment steps needed. For example, municipalities may have the goal to produce potable water. So, they’ll use the process to remove solids before downstream treatment like UV and reverse osmosis. Whereas aggregate producers may only need to remove solids to reuse or discharge their water.

When employing sedimentation as a water treatment process, it is essential to understand the sedimentation theory. Simply put, if you drop an object into a fluid and its density is greater than the fluid, the object sinks. This is why a colloid with low density will take a long time to settle vs. sand particles. How fast the object sinks is known as the settling velocity, which we note as V. 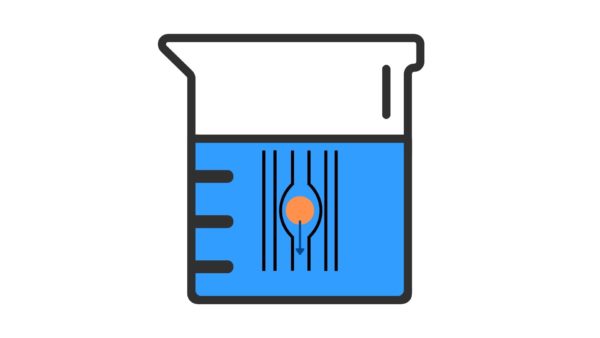 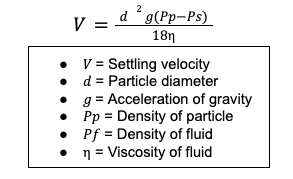 It’s important to note that the Stokes Law formula above assumes the suspended particles are spherical and solid. However, suspended solids are generally irregular shapes and range in size and density. Plus, suspended solids are influenced by the speed and direction of a flowing fluid (flow velocity). We can adjust the formula and add form factors to account for such variables. However, this post focuses on the basics of sedimentation, so we won’t discuss changes to the formula.

There are four sedimentation processes depending on the solids’ size, physical properties, and density. These processes generally break down into unhindered and hindered settling categories.

At Clearwater, we use jar tests to calculate the settling velocity of suspended particles in a raw water sample. With a graduated cylindrical beaker, we time how long it takes particles to fall from the top of the water column and settle at the bottom of the beaker. We can calculate the settling velocity in ft/sec with this information. Further, we can account for unhindered and hindered settling.

Coagulants and polymer flocculants are two chemicals used to aid the sedimentation process.

Most wastewater contains suspended particles and colloids that have a negative charge. The negative charge around each particle causes the particles to push away from each other. Think of a room full of balloons. So, negatively charged particles are more likely to stay in suspension instead of settling.

Coagulants neutralize the particles’ negative charge. Once neutralized, the particles can agglomerate to form larger particles or micro-flocs. Though, in many cases, micro-flocs don’t have enough mass to fall out of suspension on their own, so flocculants are added.

Flocculants are water-soluble polymers that create a reaction called flocculation. Flocculation is a process of adhesion where particles and colloids come together to create longer and larger particle chains. The larger particles formed by flocculation have a high mass-to-drag ratio and settle out of suspension quicker than individual particles.

Clarifiers and tanks streamline the sedimentation water treatment process. They provide mechanisms to manage sludge created by sedimentation and transport clean water for discharge or reuse. These machines enhance the sedimentation process on their own and are often more efficient with the addition of coagulants and flocculants.

Horizontal flow tanks employ one of the simplest sedimentation forms. Water with suspended solids enters at one end of the tank and flows towards the other end of the tank. As the water flows, the solids fall out of suspension and settle at the bottom of the tank. The goal is for the majority of the suspended particles to settle before the water reaches overflow weirs at the outlet end of the tank. 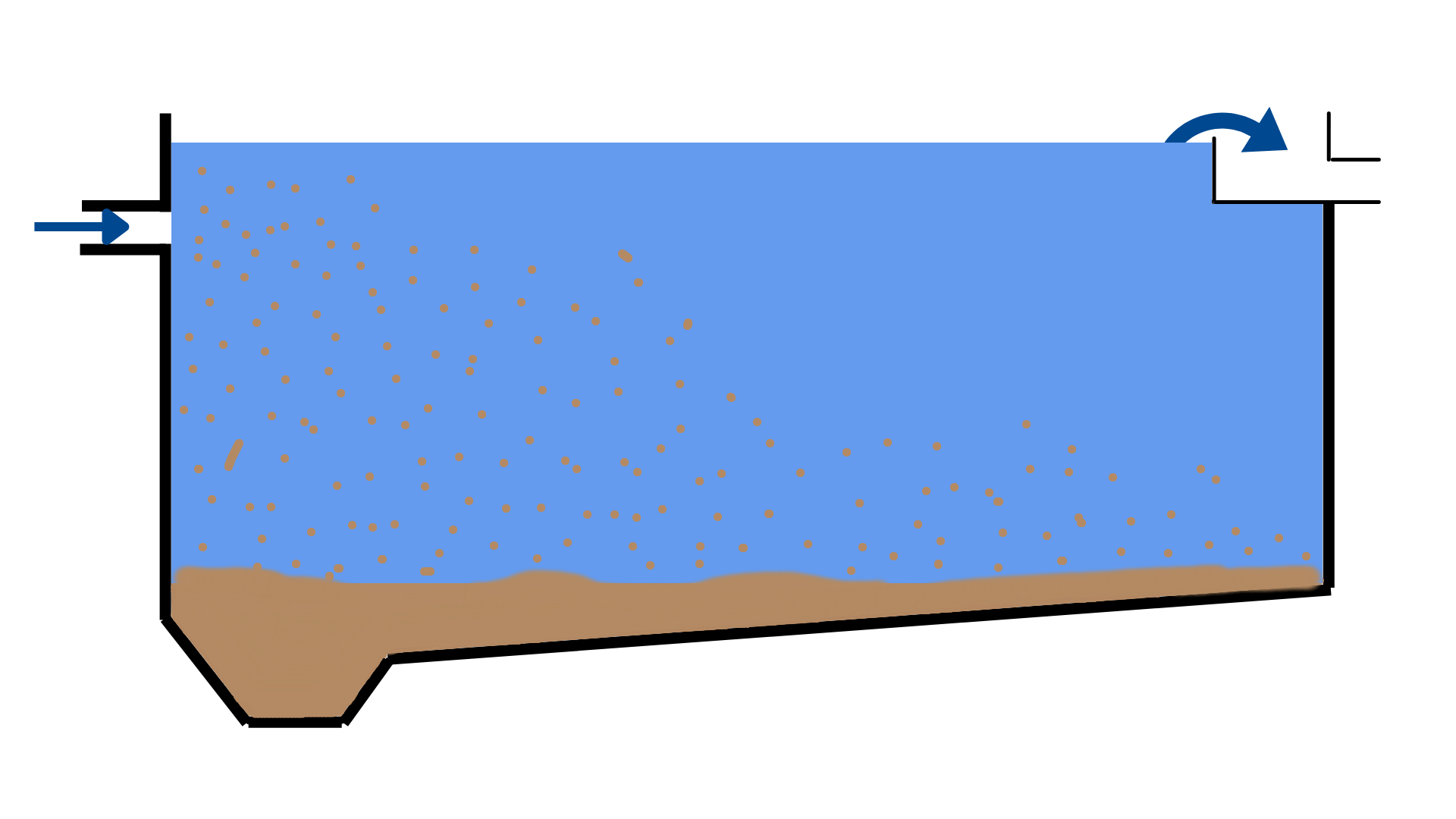 Generally, these tanks have a floor that slopes towards the inlet end of the tank to increase sludge build-up. Sludge collects at the bottom of the slope, where an evacuation port pumps it to a discharge point.

Other designs may slope the sides of the tank, so the settled solids fall to the center of the tank floor. Then the sludge is moved to a discharge point with an auger system. 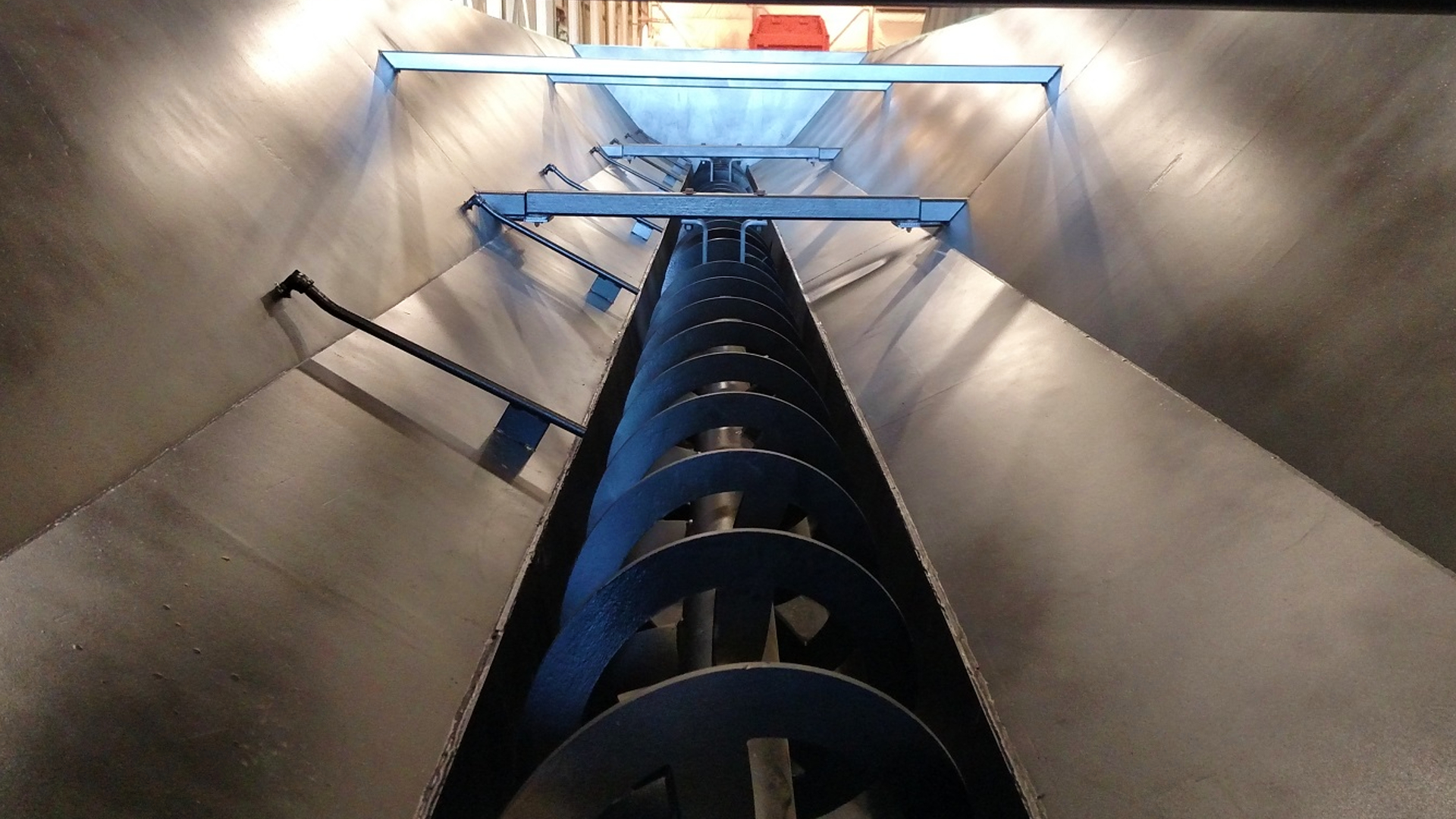 Radial flow tanks are large circular tanks with inclined or cone-shaped bottoms for sludge evacuation. The large tanks provide retention time to slow the water down so particles can settle. These tanks use large rotating rakes to compact and move sludge toward the center of the tank for discharge. As suspended solids fall out of suspension, clean water rises and overflows peripheral weirs. 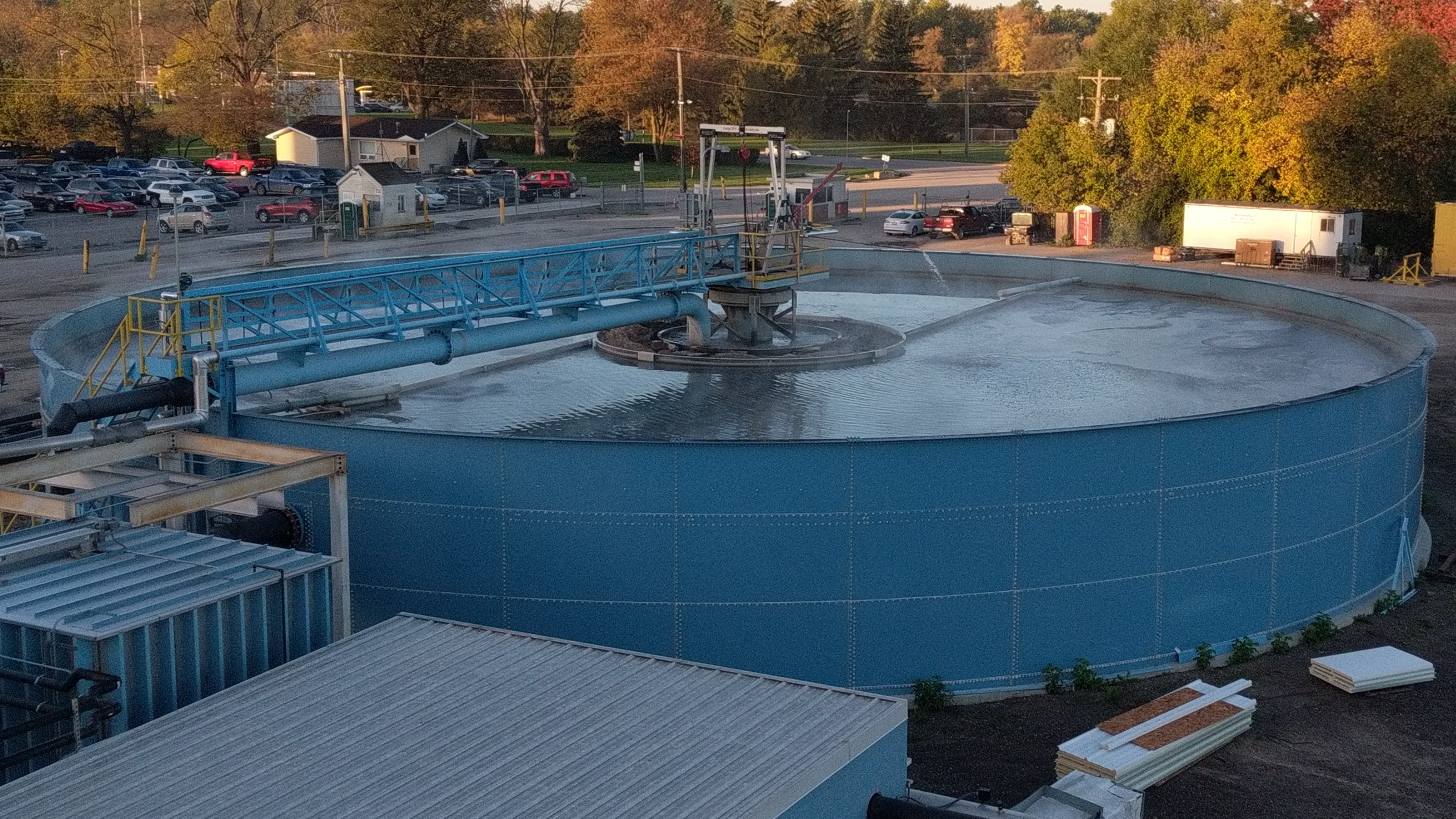 Radial flow tanks generally introduce raw water in two different ways. The most common is with a feed-well in the center of the tank. The center feed-well reduces the influent energy and allows for uniform influent distribution. The feed-well provides mixing energy for chemical introduction and efficient flocculation while protecting the sedimentation process in the rest of the tank. 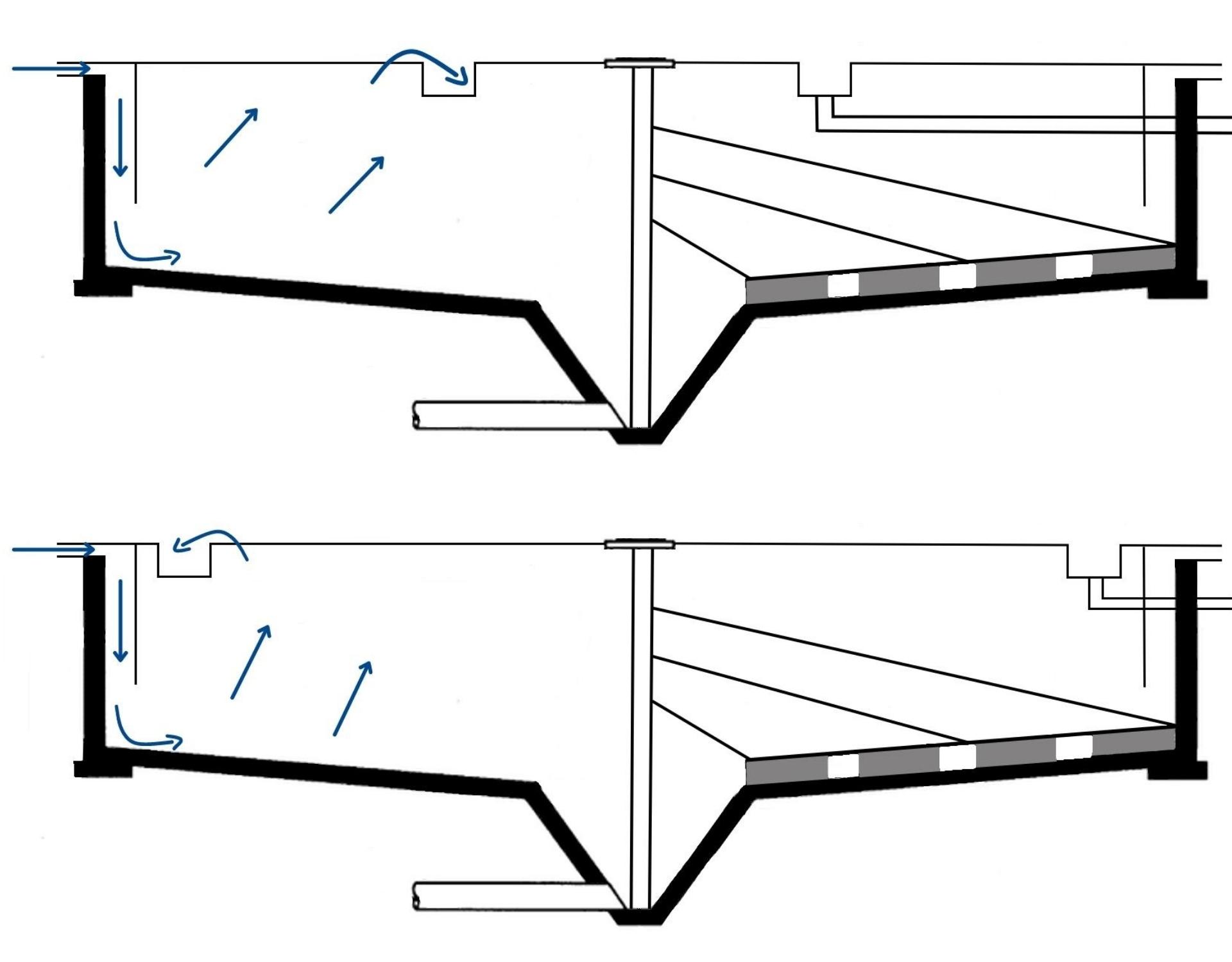 Inclined tube and plate settlers are used in clarifiers and tanks to aid sedimentation. They do so by redirecting the incoming flow and increasing the settling surface area.

A series of plates or tubes are installed at a 60-degree angle to the tank’s surface. As water enters the system, it is slowed down and redirected to flow up between the plates. The redirected flow provides an improved equal-flow pattern. 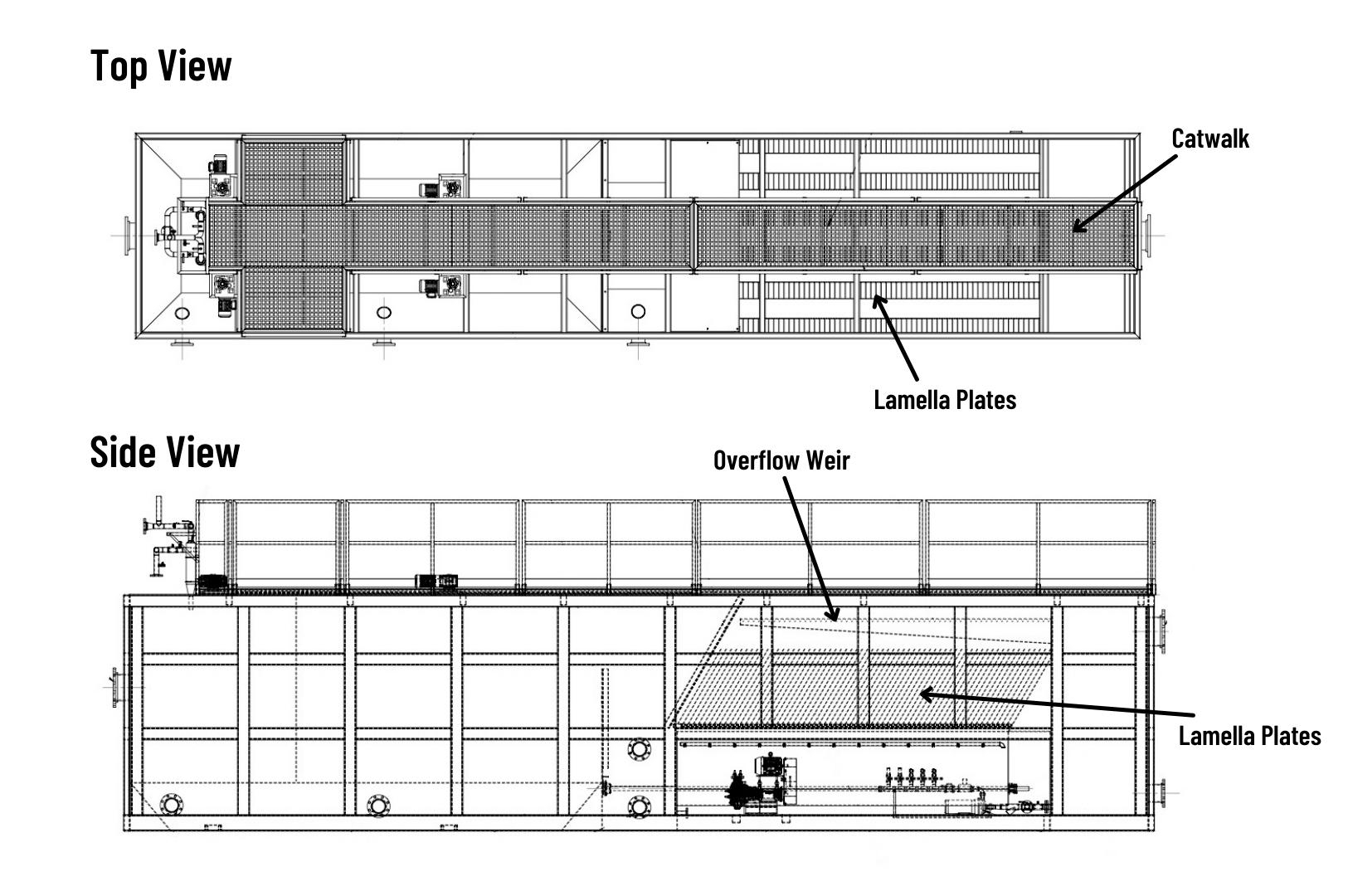 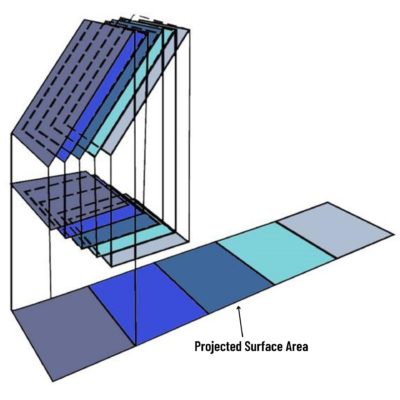 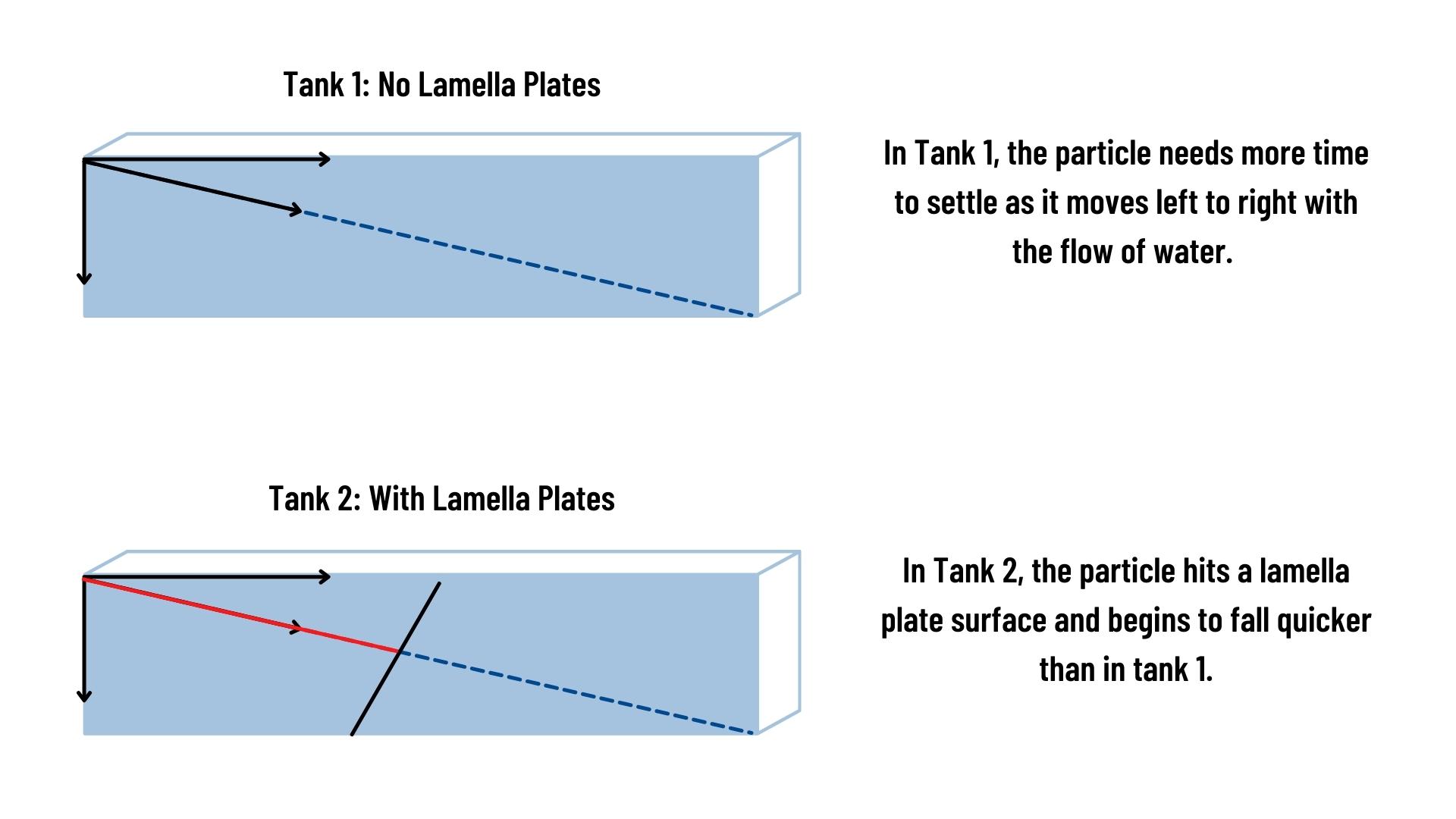 Of course, though particles contact the inclined plates quicker, the question remains about how they get to the bottom of the tank quicker. The answer is drafting, also called slipstreaming. The settling particles benefit from grouping up like racing athletes in swimming, cycling, or car racing. As the particles hit the tube or plate surface, they group up, and as they group up, they draft off one another and move faster. 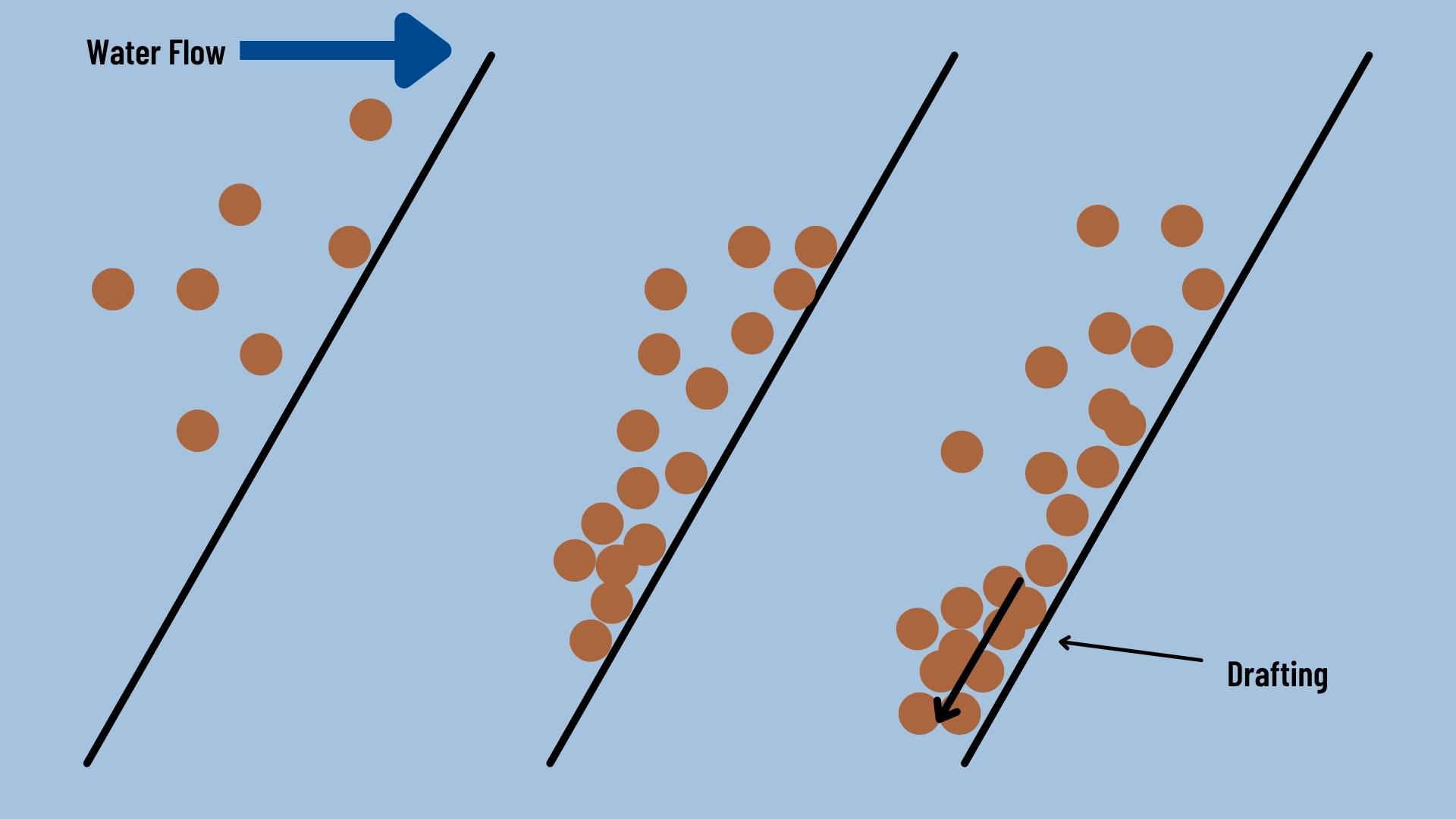 Ballasted flocculation is a high-rate physical-chemical treatment process. First, raw water enters a coagulant mix tank. Then the coagulated water overflows a weir and enters a flocculation tank where it’s mixed with a polymer and micro-sand or other micro-carrier. In the flocculation tank, the polymer aids the aggregation of the sand and suspended particles to form a large floc.

After the flocculation tank, the water flows into a clarification tank where the solids settle and clean water overflows weirs. Most ballasted flocculation clarifier tanks use inclined tube or plate settlers to increase the settling rate.

The sludge that settles at the bottom of the clarification tank is pumped to a hydrocyclone where the micro-sand is separated from the solids. The solids discharge to waste, and micro-sand is reused in the flocculation tank.

Until recently, customers had to choose between a clarifier or a thickener. Clarifiers would provide clean water for reuse, but the sludge discharge was soupy and hard to manage. On the other hand, thickeners provided handleable sludge underflow, but the clean water was not clean enough for reuse.

A High Compaction Clarifying Thickener allows you to recover 90% of your process water and discharge 65%+ solids by weight underflow. These systems use vertically orientated designs, cone bottoms, rotating rakes, and water pressure to create thick sludge and clean water.

As particles and flocs settle, they’re compacted with a rotating rake to form a thick sludge. Further, the vertical design uses water pressure to compact and dewater the sludge at the bottom of the tank. The compacted sludge is discharged from the tank’s cone bottom, and clean water overflows peripheral weirs.

High Compaction Clarifying Thickeners are incredibly efficient and reliable due to minimal moving parts. The vertical design means they have a small footprint compared to horizontal clarifiers. Plus, they can be modularly built for quick erection, and several tanks can be combined for high flows. Bolt-up designs are available for high-flow jobs with longer erection times. 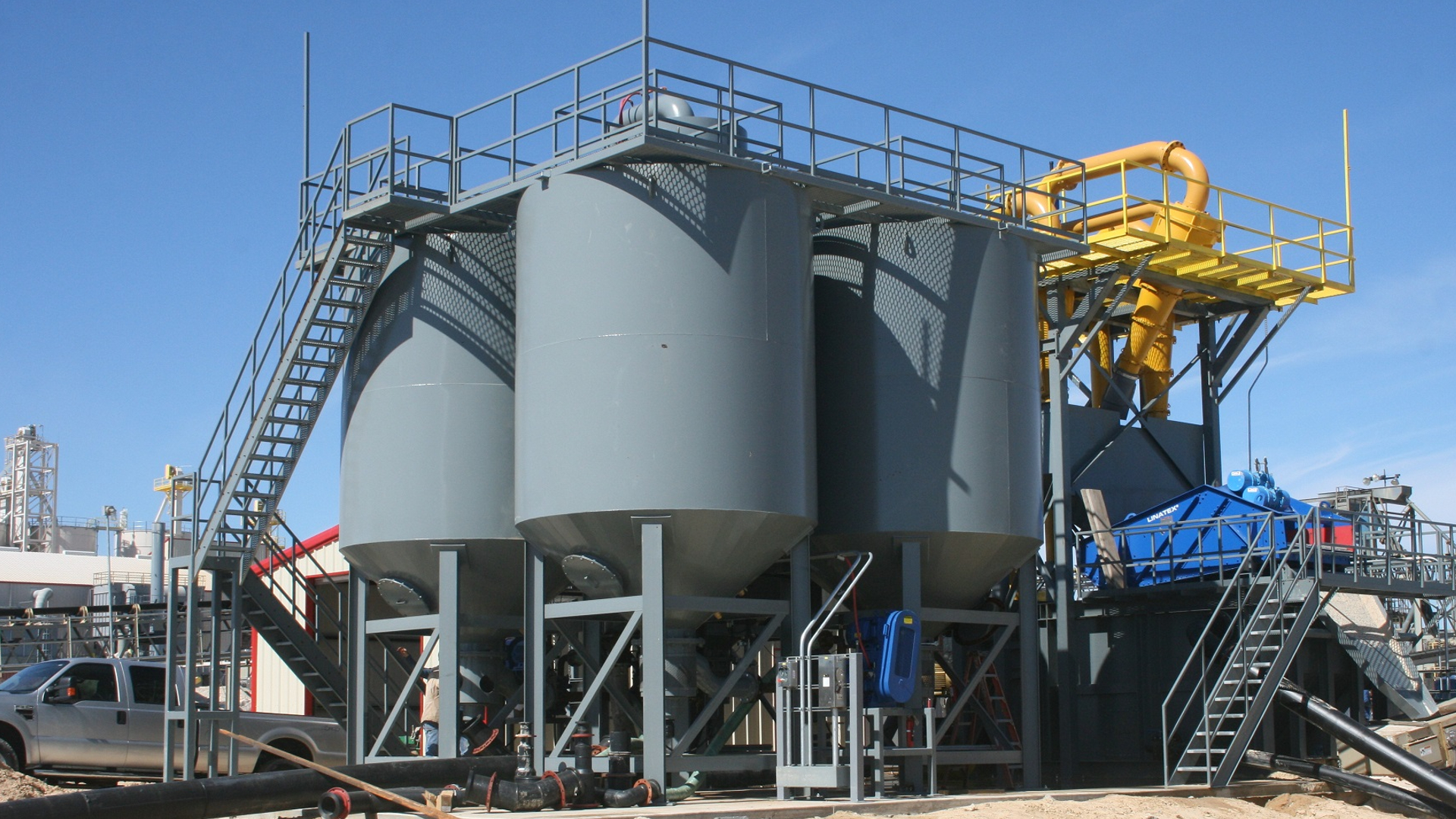 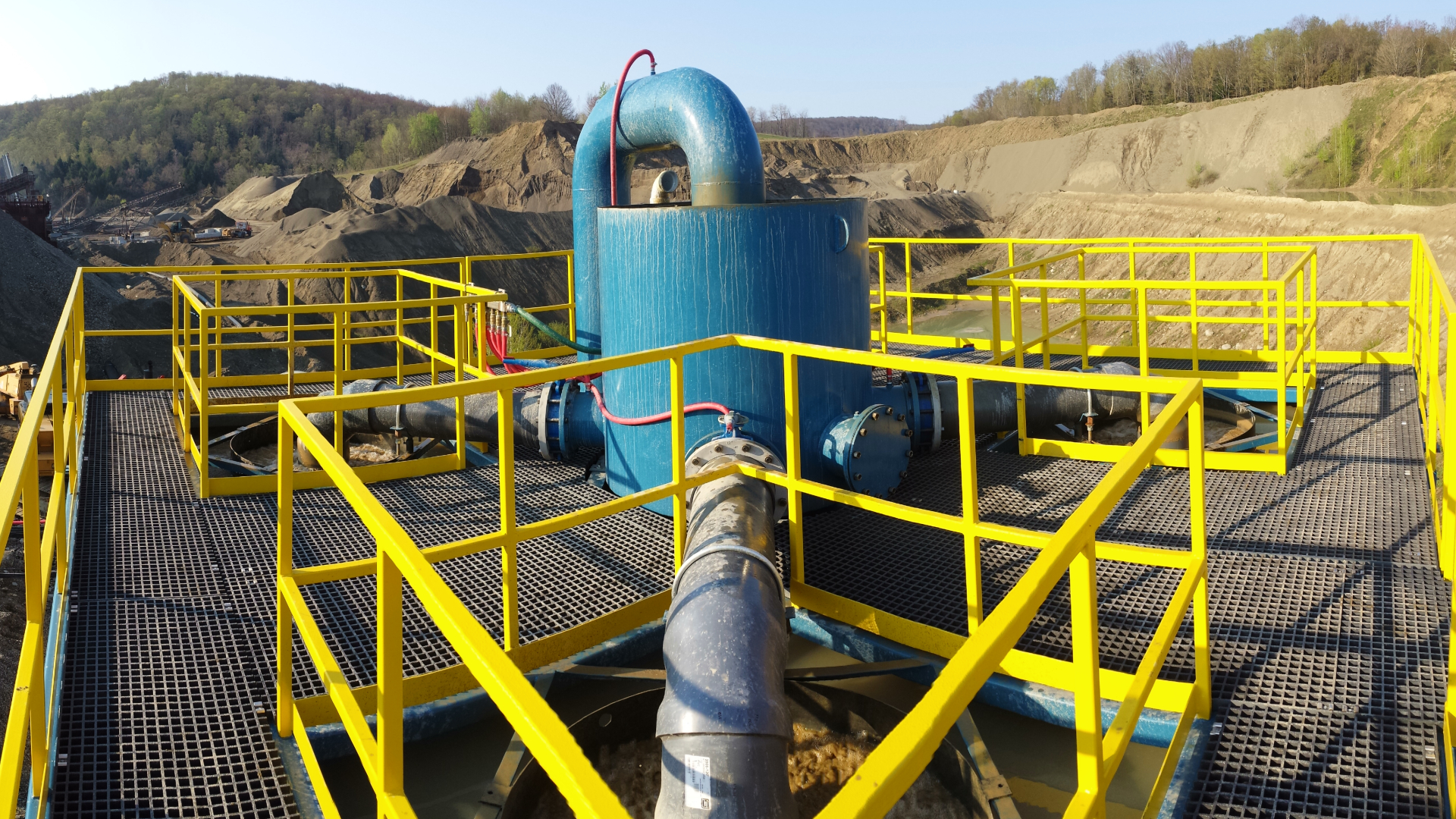 Settling ponds, also called settling basins or lagoons, are possibly the oldest and most widely used solution for sedimentation. As the name implies, these are bodies of water that range in size where solids are given time to fall out of suspension.

Coagulants and flocculants can aid the sedimentation process, but settling ponds don’t employ mechanical parts. Most users clean sludge from their ponds with excavators or front loaders to extend the pond’s life.

Settling basin design can vary from large, single bodies of water to multi-pond setups. The goal is for particles to settle as the water flows from one stage to the next.

Settling ponds can be a cheap option for some operations. However, their efficiency is limited to how fast the particles settle out of suspension. Plus, their size can limit the amount of production space within a permitted area.

What’s Right For You?

It depends on the characteristics of your wastewater and suspended solids. To select and accurately size a clarifier, you need to understand the TSS, solids characteristics, and settling velocity. Lab tests should be performed to gather and analyze this information.

Further, jar tests determine the best clarification chemicals. You can remove a lot of variables in the planning stage to implement the best sedimentation water treatment plan.

FacebookTwitterRedditLinkedInWhatsAppTumblrPinterestVkEmail
Page load link
We use cookies on our website to give you the most relevant experience by remembering your preferences and repeat visits. By clicking “Accept”, you consent to the use of ALL the cookies.
Do not sell my personal information.
Cookie settingsACCEPT
Manage consent

This website uses cookies to improve your experience while you navigate through the website. Out of these, the cookies that are categorized as necessary are stored on your browser as they are essential for the working of basic functionalities of the website. We also use third-party cookies that help us analyze and understand how you use this website. These cookies will be stored in your browser only with your consent. You also have the option to opt-out of these cookies. But opting out of some of these cookies may affect your browsing experience.
Necessary Always Enabled
Necessary cookies are absolutely essential for the website to function properly. These cookies ensure basic functionalities and security features of the website, anonymously.
Functional
Functional cookies help to perform certain functionalities like sharing the content of the website on social media platforms, collect feedbacks, and other third-party features.
Performance
Performance cookies are used to understand and analyze the key performance indexes of the website which helps in delivering a better user experience for the visitors.
Analytics
Analytical cookies are used to understand how visitors interact with the website. These cookies help provide information on metrics the number of visitors, bounce rate, traffic source, etc.
Advertisement
Advertisement cookies are used to provide visitors with relevant ads and marketing campaigns. These cookies track visitors across websites and collect information to provide customized ads.
Others
Other uncategorized cookies are those that are being analyzed and have not been classified into a category as yet.
SAVE & ACCEPT
Go to Top